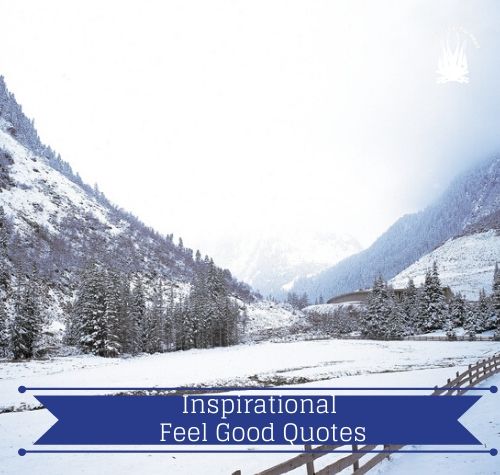 We sincerely hope that these feel good inspirational quotes, in video and picture formats will help you, especially if you are going through a hard time in your life.  Unfortunately, none of us can escape these rough times, but they will also remind us to appreciate those good times. When we reflect on things, this can help us change the path of our life if need be.

1). If you want to feel good, you have to go out and do some good…… Oprah Winfrey

2). When you’re feeling your worst, that’s when you get to know yourself the best….. Leslie Grossman

Leslie Grossman: She is an American actress, who was born in Los Angeles, California, U.S. She is best known for appearing as Mary Cherry on The WB comedy-drama series called Popular.

3). It’s also selfish because it makes you feel good when you help others. I’ve been helped by acts of kindness from strangers. That’s why we’re here, after all, to help others…… Carol Burnett

4). I think it’s better to feel good than to look good……. Tom Hanks

Tom Hanks: He is an American actor and filmmaker, who was born in Concord, California, U.S. He is one of the most recognizable and popular film stars in the world. Has starred in major films such as Sleepless in Seattle, Forrest Gump, You’ve Got Mail and many others.

5). Saying thanks to the world, and acknowledging your own accomplishments, is a great way to feel good and stay positive……..Rachel Robins

6). Real beauty is to be true to oneself. That’s what makes me feel good…..Laetitia Casta

Laetitia Casta:  She is a French actress and model who was born in Pont-Audemer, Normandy, France. She is a spokesperson for the cosmetics company L’Oréal. She has appeared in major publications such as Cosmopolitan and Vogue.

7).  Be Thankful for What You Have and You Will End Up Having More….. Oprah Winfrey.

She was always a champion of the underdog, especially when it came to human rights such as racial. She commanded such deep respect and admiration for her work and support for organizations such as the United Nations.

9). When you look good, you feel good. Confidence with what you’re wearing is very important. If you feel good, you will always perform your best without worrying about anything……….Maria Sharapova

Maria Sharapova:  She is a Russian professional tennis player, who was born in Nyagan, Russia. She has been a resident of the United States since 1994.  An Olympic medalist who was ranked world No. 1 in singles on five separate occasions.

10). Just do your best. I find that if I set that goal for myself and no one else, I feel good…….Cobie Smulders.

Cobie Smulders: She is a Canadian model and actress, who was born in Vancouver, British Columbia, Canada. Best known for playing Robin Scherbatsky in the Hit sitcom called How I Met Your Mother on CBS. The show ran for nine years. She also appeared in the Marvel films Franchise.

11). Feeling good about ourselves is essential in our being able to love others…Fred Rogers

Fred Rogers:  He was an American writer, TV personality, and producer, who was born in Latrobe, Pennsylvania, U.S. He was best known for creating and hosting the Children’s TV series called Mister Rogers’ Neighborhood.

12).  Success isn’t about how much money you make, it’s about the difference you make in people’s lives…..Michelle Obama

13). Only a life lived for others is a life worthwhile………… Albert Einstein

Albert Einstein: He was a German-born physicist, who was born in Ulm, Germany. He is best known for developing developed the theory of relativity, which is one of the two pillars of modern physics. He won the Nobel Prize in Physics in 1921.

14). Learn to value yourself, which means. Fight for your happiness…Ayn Rand

Ayn Rand: She was a Russian-American writer who was born in St. Petersburg, Russia. She is best known for her two novels called Atlas Shrugged and The Fountainhead. She moved to the USA in 1926.

15). One way to feel good about yourself is to love yourself… to take care of yourself…… Goldie Hawn.

Goldie Hawn: She is an American actress, and producer who was born in Washington, D.C. She rose to fame through the Comedy program Rowan & Martin’s Laugh-In on NBC. She appeared in many films, including Cactus Flower, Private Benjamin and There’s a Girl in My Soup.

16). If you feel good about who you are inside, it will radiate……. Patti Smith

Patti Smith:  She is an American singer-songwriter, musician, and author, who was born in Chicago, Illinois in the US. She rose to fame with her album called Horses. She was dubbed the punk poet laureate because she fused poetry and rock through her work and performances.

17). It Doesn’t Matter Where You Came From. All That Matters Is Where You Are Going……. Brian Tracy

Brian Tracy: He is one of the world’s leading authorities on personal and business success, who was born in Charlottetown, Prince Edward Island, Canada. He started his life with nothing and at one time had to sleep in his car to get by. Brian has helped millions of people in both their business and personal lives.