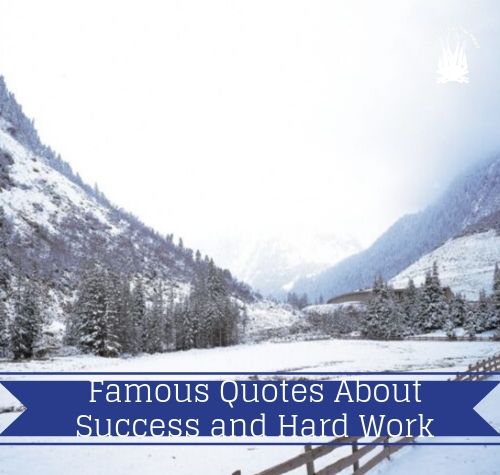 In all aspects of life, success comes in most cases from a lot of hard work and consistent action. We do hope that these famous video quotes about success and hard work, from people who have made their mark in life, will motivate and inspire you to work hard on your dreams and your goals.

I love inspirational quotes because they remind me not to give up on myself and life. Please remember these famous quotes for success and that in most cases the key to success is hard work and determination.

Dwayne Johnson: He is an American actor and producer, who was born in Hayward, California. He is one of the highest-grossing actors of all time because his films have earned over $3.4 billion in North America alone. He was a professional wrestler in WWE before pursuing this successful acting career.

2). There is no substitute for hard work. Never give up. Never stop believing. Never stop fighting. ………..Hope Hicks.

Hope Hicks: She is an American public relations consultant, who was born in Greenwich, Connecticut. She served in the white house as Communications Director.

3). With hard work and effort, you can achieve anything………. Antoine Griezmann.

Antoine Griezmann: He is a French professional footballer who was born in Mâcon, France. He plays for the famous Spanish football club Barcelona and also the French national team.

4). I’ve learned that anything in life worth having comes from patience and hard work………….. Greg Behrendt.

Greg Behrendt: He is an American author and comedian, who was born in San Francisco, California. He is best known for his work as a script consultant for the Hit TV sitcom called ” Sex and the City ” on HBO.

5). There are no secrets to success. It is the result of preparation, hard work, and learning from failure………… Colin Powell.

Colin Powell: He is a retired four-star general in the United States Army and an American politician, who was born in New York City. He has been the first, and only, Jamaican American, so far, to serve on the Joint Chiefs of Staff.

6). Winners embrace hard work. They love the discipline of it, the trade-off they’re making to win. Losers, on the other hand, see it as punishment. And that’s the difference……….. Lou Holtz.

Lou Holtz: He is a former American football player and coach, who was born in Follansbee, West Virginia. He is the only college football coach, to lead six different programs to bowl games. In 2008, he was elected to the College Football Hall of Fame.

7). The reason a lot of people do not recognize opportunity is because it usually goes around wearing overalls looking like hard work………….. Thomas A. Edison.

Thomas Edison: He was an American inventor and businessman, who was born in Milan, Ohio. He has been rightly described as the greatest inventor in America. His inventions covered important areas such as communication, electric power, and motion pictures.

8). There’s no escalators – there’s only staircases to success. There is no substitute for hard work………… Lilly Singh.

Lilly Singh: She is a Canadian comedian, actress, and TV host, who was born in Scarborough, Ontario. She is listed on the Forbes list as one of the world’s highest-paid YouTube stars, earning a reported $10.5 million, in 2017.

9). The price of success is hard work, dedication to the job at hand, and the determination that whether we win or lose, we have applied the best of ourselves to the task at hand……….. Vince Lombardi.

Vince Lombardi: -He was one of the most successful football coaches in the history of the game. He was born in Brooklyn, New York, and his penchant for winning and doing one’s best left a strong imprint on the game, as well as on players and fans.

10).  My success was due to good luck, hard work, and support and advice from friends and mentors. But most importantly, it depended on me to keep trying after I had failed……….. Mark Warner.

He is an American politician and businessman who was born in Indianapolis, Indiana.  He serves as a member of the Democratic Party and currently is the Vice-Chair of the Senate Intelligence Committee.

11).  I have achieved everything through either hard work or luck………… Sandra Bullock.

Sandra Bullock: She is an American actress and philanthropist, who was born in New Orleans, Louisiana. She was once the highest-paid actress in the world for two years and has won awards such as the Academy and Golden Globe Awards.

12).  I do not believe in excuses. I believe in hard work as the prime solvent of life’s problems………… James Cash Penney.

James Cash Penney: was an American businessman and entrepreneur who was born in Hamilton, Missouri. He is best known as the founder of the famous J. C. Penney stores, which began in 1902.

13).  Inspiration is one thing and you can’t control it, but hard work is what keeps the ship moving. Good luck means, work hard. Keep up the good work……….. Kevin Eubanks.

Kevin Eubanks: He is an American jazz guitarist and composer, who was born in Philadelphia, Pennsylvania. He is best known as the leader of The Tonight Show Band and the Primetime Band.

14). Success is no accident. It is hard work, perseverance, learning, studying, sacrifice and most of all, love of what you are doing or learning to do………… Pele.

Pele:  Born Edson Arantes do Nascimento, but better known worldwide as Pelé. He is a Brazilian retired professional footballer, who was born in Três Corações, Minas Gerais, Brazil, and is widely regarded as one of the greatest players of all time. Among his many awards was the FIFA Player of the Century award.

15).   I do not know anyone who has got to the top without hard work. That is the recipe. It will not always get you to the top but should get you pretty near……….. Margaret Thatcher.

Margaret Thatcher: She was was a British stateswoman who was born in Grantham, Lincolnshire in England. She served as the Prime Minister of the United Kingdom from 1979 to 1990 and was the first woman to do so.

16).   With hard work and dedication, anything is possible………… Timothy Weah.

Timothy Weah: He is an American professional soccer player, who was born in New York City. He plays for the US national team and the French club Lille. His father is George Weah, who is President of Liberia.

Virat Kohli: He is an Indian cricketer who was born in Delhi, India. He currently captains the India national team and is regarded as one of the world’s best batsmen.